Odyssey Of The Mind

Odyssey Of The Mind

On Saturday March 3rd, 2018, there were six teams from the Line Mountain School District who competed  in the North Central Odyssey of the Mind Regional Competition at the Berwick High School.

Two teams that will be representing Line Mountain at the State Odyssey of the Mind Tournamentat the  Pocono Mountain East Jr. / Sr. High School in Swiftwater on Saturday April 7th. 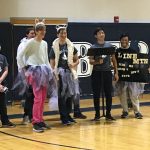 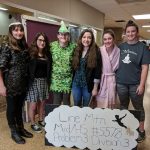 BERWICK, PA.  Results from Saturday March 4, 2017 of the North Central Odyssey of the Mind Regional Competition.  Nine teams from the Line Mountain School District were represented at Berwick.  Six of those teams will be advancing to state competition on Saturday, April 1st at Moon High School near Pittsburgh. [slideshow_deploy id=’8972’]

Congratulations to the following teams on this great accomplishment.

The future and the past collide in this problem about important works of art – both existing and yet-to-be-created. Teams will create and present an original performance about time travelers looking to discover the inspiration for great works of art, little did they know – it was OMER every time! The travelers go back in time — twice into our past and once into our future. They will see OMER inspire two classical artists and a team-created artist from our future. The performance will include how the three works of art positively impact the world, a visual and audible effect that indicates when time travel is occurring, two re-creations of the classic works of art selected from a list, and a team-created work of art.

Placing 1st in Problem 3 Division 3 are:

Placing 1st in Problem 3 Division 2 are:

Placing 1st in Problem 3 Division 1 are:

Problem 5: To Be Continued: A Superhero Cliffhanger
Divisions I, II, III & IV

Creativity is being taken away from the world, and it is up to Odyssey teams to rescue it! Teams will create and present a humorous performance about an unexpected superhero that encounters three different situations where it must save creativity in some way. The superhero will change appearance when it displays its superpowers and go back to blending in with society when not. The performance will also include a clumsy sidekick, a nemesis character, a choreographed battle, and a cliffhanger ending.

Placing 2nd in Problem 5 Division 3 are:

Creativity can be defined by using only what you have to get a job done. In this problem, teams will design, build, and test a structure made of only balsa wood and glue that will balance and support as much weight as possible. The structure must include sets of balsa pieces of predetermined sizes and quantities as listed in the problem. Some sets must be parts of the structure while others, if incorporated, will receive additional score – the more sets of pieces used, the higher the score! Teams will present a performance with a theme about using what’s available and that incorporates weight-placement and assembling original team creations.

Placing 2nd in Problem 4 Division 3 are:

Also placing but not moving on are:  Placed 3rd in Problem 4 Division 2 are: